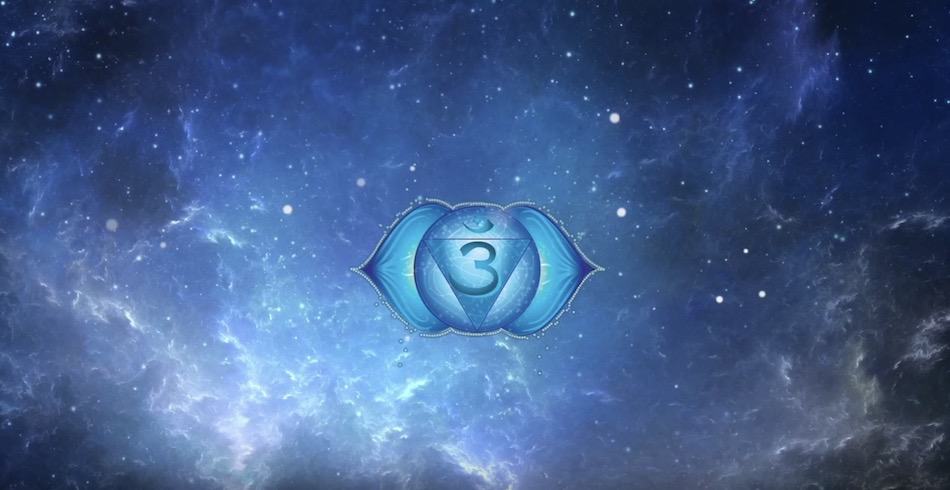 Are you able to see clearly and perceive things easily and accurately? Or do you find yourself feeling foggy, overwhelmed, or stuck in the details? The third eye chakra is the source of vision, insight, and intuition, as well as the portal to spirituality. When it becomes blocked, our ability to perceive and understand the things that are happening around us is hampered. But specific asana and meditation practices, as well as targeted affirmations, can bring balance back to the third eye chakra, returning us to our intuition.

In yogic thought, the subtle body is a plane of existence that is distinct from the physical body, and it governs our life force energy. As the centers of that energy, the chakras are a key part of the subtle body.

Whether on the Internet or in-person, you’ve probably seen illustrations depicting the chakra system – even if you didn’t realize it. It’s most often drawn on the silhouette of a person and represented as a series of colored circles that run up the spine from the tailbone to the crown of the head. The circular depiction comes from the meaning of the Sanskrit word “chakra,” which translates to “wheel” or “disk,” and each chakra is associated with one of the seven colors of the rainbow.

Each of the seven main chakras corresponds to a certain part of the body and the organs located there, as well as to particular traits and components of well-being. When all of the chakras are in balance, neither overactive nor underactive, we can enjoy good all-around health and wellness. But often, one or more of the chakras is blocked or otherwise out of alignment, bringing about mental, emotional, or physical pain.

The third eye chakra is the sixth of the seven main chakras – meaning it’s associated with dark blue-purple, the second-to-last color in the rainbow, and that it’s one of our most important sources of spirituality. The third eye chakra connects the self and the world, allowing us to transcend duality.

It is located between the eyebrows, just above the bridge of the nose (not in the center of the forehead, which is a common misconception). The third eye chakra is also called the Ajna chakra, which translates to “command” or “perceiving,” hinting at this chakra’s role in how we perceive the world. While it is predominantly about spirituality, the third eye chakra is also associated with the eyes, ears, pituitary gland, pineal gland, and nervous system.

With its location between the eyes, the third eye chakra relates to vision, but it goes much deeper than literal eyesight. This chakra governs our perception, intuition, and insight, and helps us perceive both the physical and the subtle. It’s our source of wisdom and inner guidance, allowing us to differentiate between dreams and reality and to make decisions neutrally and objectively. When the third eye chakra is open, we see things as they are and correctly intuit the things we cannot see.

But when this chakra is blocked or unbalanced, we tend to overindulge in fantasies, ignore our intuition, and fail to see the bigger picture. We lack clarity, focus, and faith in our purpose. If the third eye becomes blocked, you might also find yourself getting more attached to outcomes and being either overly logical or overly emotional. People with a blockage in the third eye chakra also frequently experience depression, anxiety, paranoia, and even hallucinations. Physically, it can lead to headaches, vision problems, sinus trouble, and high blood pressure.

While asana is less often cited as a tool for balancing the third eye chakra, certain poses can be practiced to target it. Pressing the forehead into the ground during child’s pose and bringing it toward the legs in standing forward fold or head-to-knee pose both stimulate the third eye chakra.

It’s not hard to find guided meditations that focus on the third eye chakra; in fact, some traditions teach that the attention should always be on the third eye during meditation (and even during asana), and that the eyes should physically gaze toward the space between the eyebrows. To unblock this chakra with meditation, imagine a dark blue-purple ball of energy at the third eye, and see it getting bigger and bigger. As it does, feel your entire body absorbing the spiritual energy of the third eye.

Lastly, repeating affirmations, either aloud or to yourself, can be very powerful for removing blocks in the third eye chakra. “I am in touch with my inner guidance,” “I listen to my deepest wisdom,” and, “I trust my intuition,” are some of the most effective affirmations because they remind us to let our third eye chakra do its job.