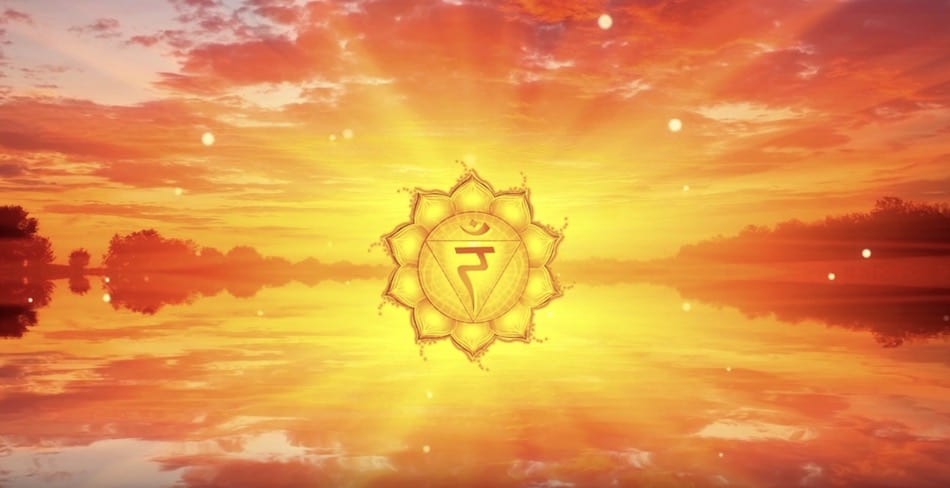 Do you have a strong sense of self and the ability to go after what you want? Or do you often feel like a victim or find yourself avoiding the spotlight? If the latter sounds more like you, you may have an imbalance in your solar plexus chakra, which relates to all of these qualities. Fortunately, you can work to balance and unblock this and the other chakras through targeted meditation and asana practices.

If you’ve spent much time in yoga studios or spiritual centers, you’ve likely come across illustrations representing the chakras: often a silhouette of a seated person, with a series of colored circles running up the center of their upper body. Each chakra is associated with a particular color, and if you look carefully, you’ll see that the colors follow the same order as the rainbow. “Chakra” is a Sanskrit word that translates to “wheel” or “disk,” which is why they are usually depicted as circles.

The chakra system is part of what yogis call the subtle body, which relates to the life force energy that flows through the body, rather than to its bones or organs. The chakras are centers of that energy, and each one corresponds to a different part of the body – running from the base of the spine to the crown of the head – and to different organs, traits, and components of well-being. When all seven of these main chakras are balanced, the result is good holistic health. But if one or more is blocked or out of alignment, as is the case for most of us, the result is physical, mental, or emotional suffering.

The third of the seven is the solar plexus chakra, also called the Manipura chakra, which translates to “shining gem.” This chakra is located between the navel and sternum, about three finger-widths above the navel. As it deals with digestion, the source of fire in the body, the solar plexus chakra is associated with the fire element. And as the third of the seven chakras, it’s associated with the third color of the rainbow: yellow.

Given its physical location at the belly, the solar plexus chakra governs the digestive system, including the stomach, large and small intestines, liver, pancreas, and gallbladder. It also governs the adrenal glands, which produce adrenaline and the stress hormone cortisol. The solar plexus chakra has to do not only with how we digest food, but with how we “digest” our experiences in life.

From the pit of the stomach also comes characteristics like courage, willpower, and self-control, as well as purpose, direction, and self-mastery. A balanced solar plexus chakra leads to a strong sense of self, gives us mastery over our thoughts and emotions, and helps us follow our true path with a clear sense of direction. We’re able to think clearly, put our ideas into action, and generally get things done – but we avoid boasting, and instead let our results speak for themselves.

But an underactive solar plexus chakra leads to a general feeling of being “down,” including low aspirations and a lack of self-worth. It makes people see themselves as victims, refuse leadership opportunities, and tolerate abuse, in addition to causing lethargy, fatigue, and depression. At the other extreme, overactivity in the solar plexus chakra leads people to become arrogant and overconfident; these behaviors are sometimes nothing but false bravado, although in other cases, they’re more genuine.

Because it’s right at the center of the whole body, the solar plexus is often the source of physical ailments. With its relationship to digestion, a block in this chakra can create indigestion and upset stomach, as well as ulcers, diabetes, and liver disease. Whether you experience mental or physical manifestations of it, an imbalance in the solar plexus chakra is often brought on by on by experiences of rejection and criticism, a lack of affection, or feeling ignored or underappreciated.

Meditation and visualization are some of the best tools for working with the chakras. To unblock the solar plexus chakra through meditation, bring your focus to its physical location, imagining a spinning wheel of glowing yellow energy emanating from your belly. You can also look for guided recordings of fire meditations, which will help unblock the solar plexus chakra as well.

Asana practice is another way to work with the chakra system, and many poses affect the solar plexus chakra, particularly backbends, twists, and those that engage the core. Backbends like wheel and bow open up the front of the body, while core-focused poses like boat work the muscles of the solar plexus region. And as we’re often told, twists like revolved triangle and Lord of the Fishes help to stimulate digestion, meaning they’re also beneficial for the solar plexus chakra.