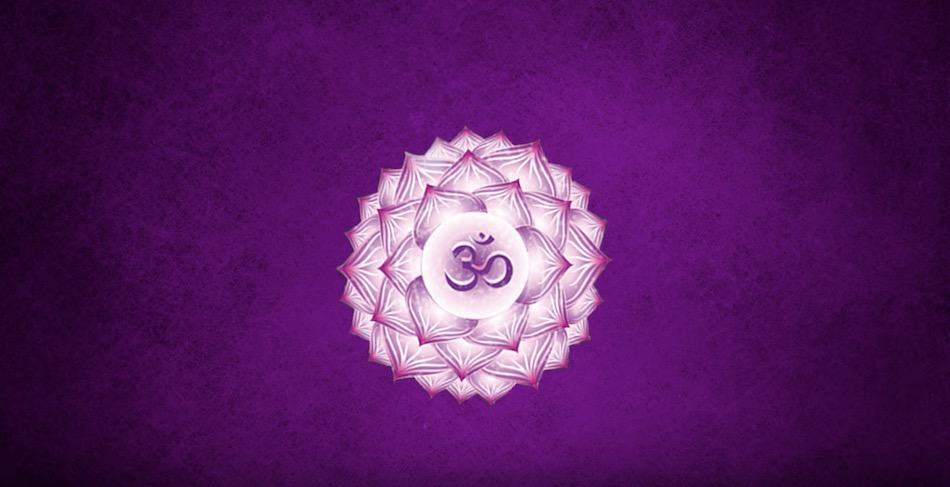 Do you feel a deep sense of inner peace and joy, and a connection to the universe? Or do you feel limited, distracted, and separated from that which is sacred? The final chakra, the crown chakra, is our source of spirituality and connection to Divinity; when it is balanced, the result can be pure bliss. Of course, for most of us, the crown chakra is blocked or out of balance – but specific yoga and meditation practices that target this chakra can help.

Yogic thought envisions human life as including various planes of existence; while the physical body is the most obvious one, the subtle body is equally important. Unlike the physical body, which contains everything from organs to muscles to arteries, the subtle body relates to the flow of life force energy. The centers of that energy are the chakras, with the seven main ones located along the spinal column. Because the word “chakra” is Sanskrit for “wheel” or “disk,” the chakras are usually thought of as spinning circles or balls of energy. Each chakra corresponds to a color of the rainbow, starting with red at the base of the spine and ending with violet at the crown of the head.

Each of the seven chakras has a unique influence on the body and on human wellness. The chakras govern the part of the physical body where they are located, as well as other characteristics and traits that affect our well-being. Ideally, every chakra is balanced, resulting in good overall holistic health. But for most people, some or all of the chakras are either overactive or underactive, bringing about suffering that may be physical, mental, or emotional.

The crown chakra is located at the top of the head and is associated with the final color in the rainbow, violet, though it’s often depicted as being white. Also called the Sahasrara chakra, meaning “thousand petals,” it is represented by the thousand-petal lotus flower.

As the seventh and final chakra, it’s the most important one in many ways, although it cannot exist independently of the others. Rather, the crown chakra integrates the qualities of each of the other six; if it is blocked, the ones below it will be blocked as well. At the other extreme of the chakra system, the root chakra connects us to the earth; many practitioners say it needs to be balanced before we will be able to find balance in the crown chakra or connection with the universe.

Closely related to the third eye, the crown chakra takes the spirituality associated with the sixth chakra a step further. It represents transcendence; it is our connection to the Divine and our source of enlightenment, spiritual connection, and everything that is sacred. It governs our awareness and presence, allowing us to reach higher states of consciousness. When it comes to the crown chakra, there is no ego and no intellect, only peace and joy. When the crown chakra is balanced, we feel liberated, inspired, and energized; we can even experience ecstasy.

But when there is an imbalance in the crown chakra, we lose our spiritual identity and become disconnected from the universe. As a result, we can become greedy and materialistic, get stuck in the past, or experience obsessive thinking or obsessive spirituality.

While the crown chakra is primarily concerned with connection and spirituality, it is physically associated with the pituitary gland, pineal gland, brain, and nervous system. A lack of balance in the crown chakra can result in headaches, light sensitivity, confusion, and dizziness, and can even cause autoimmune and neurological disorders in more severe cases.

Meditation is the most important thing we can do to balance the crown chakra. After all, meditation is how we connect to our higher selves and commune with the universe. While you meditate, focus your attention on the crown of your head; imagine a radiant sphere of light there, and feel it illuminate your entire body.

Reciting mantras is also important for unblocking the crown chakra, and the most effective mantra is the simplest one: “Om,” the sound of the universe. It can also be helpful to repeat affirmations such as, “I am part of the Divine,” “I honor the Divine within me,” and, “I am at peace.” All of these affirmations reflect the role of the crown chakra and our state of being when it is balanced.

Finally, certain yoga poses that target the crown chakra can help to balance or unblock it. Headstand, of course, is often thought of as the main pose for working with the crown chakra, as it’s one of the only ones in which the crown of the head connects with the earth. On the other hand, lotus pose also opens the crown chakra by providing a natural position for the meditation that connects us to the universe.